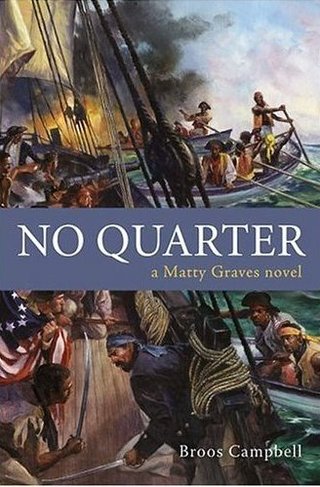 "Descriptions of the ships, the living conditions, and the battles make the setting come alive."

As the boarding nets rose, I felt as if a dreadful weight sat on my shoulders that only mayhem could lift, and I seemed to see myself from a great distance.

“You’ll be fine once the first gun is fired,” I whispered to myself. The words kept repeating in my head.

The pair of Navy pistols I hooked onto my belt felt ridiculously large. My fine dueling pistols were stowed in Billy’s cabin for safekeeping, but they weren’t suited to the present purpose anyway. A service pistol comes with a spike along the left side for hooking it in your belt, which prevents your losing it at some inconvenient moment, and it is a sturdy thing, with an iron butt-cap that makes it an admirable skull-cracker.

Someone handed me a monkey of grog. I forced myself to sip it, not down it. My legs were jigging. The need to find a new rammer for one of my gun-captains gave me a distraction from the growing noise of the approaching drums. I could hear the rhythmic splashing of the picaroons’ oars. I could hear voices counting cadence in island French, and I found the Creole inflections comforting in their familiarity. My mind raced from thought to thought. I wondered what horror had caused my French tutor, a mulatto as imperious as he was poor, to exchange his much-lamented villa for two dirty rooms in Fell’s Point.

My men and I squatted on the quarterdeck beneath the hammock nettings as the Rattle-Snake crept into the middle of the becalmed convoy. I could see the masts of two of the merchant ships to starboard across the far rail from me, and a third about fifty yards off the larboard bow. I couldn’t see Augustin von Steuben from where I crouched, but I knew she had drifted some way off in the current and had gotten a boat out. I hoped cheerful old Spetters could tow within range of our guns before the picaroons reached him.

Wickett, in shirtsleeves and a wide straw hat, stood at the break of the quarterdeck with one hand raised. In the other he held his uniform coat.

“In sweeps!” he called. “No time to stow them—pile them fore and aft between the masts, there. Mr. Rogers, I’ll have the guns run out, if you please!” He threw the straw hat away and thrust his arms into the sleeves of his coat. “Mr. Graves, get those swivels into action!”

I grabbed the nearest murdering-piece and dropped its pivot into the receiving hole drilled in the gunwale, squawking at my crews to follow my example. They knew what they were about and set to, loading the swivel guns with old bent nails and bits of scrap metal, and joining in the general shout of No quarter! No quarter!