"The War of Knives give us a tour of the Haitian Revolution that would make Harry Flashman doff his hat and drop his jaw. Along with all the excellent fun of this book, Broos Campbell seems to know the subject rather well, though he certainly is never dull about it."

—Madison Smartt Bell,
author of All Souls' Rising and
Toussaint Louverture: A Biography

“Battles with swords, muskets, and cannons run rampant [and] blood flows like water every time one group of patriots meets another. Everyone is some sort of patriot ...”

"Matty Graves and The War of Knives are sure-fire winners ..."
—Jay Worrall,
author of Any Approaching Enemy

"Don't start this one at bedtime; you'll be up all night!"
—William H. White,
author of the Oliver Baldwin series

Sent ashore to observe Toussaint L'Ouverture's siege of Jacmel in southern Hispaniola in 1800, Acting Lieutenant Matty Graves unveils a murderous conspiracy, becomes entangled in a race war, and discovers a dark secret about his own past. 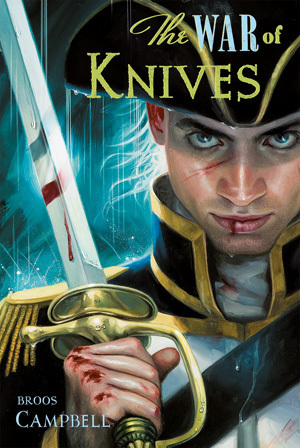 "Matty Graves, acting-lieutenant aboard the Rattle Snake in 1800, is still dealing with the loss of his captain, his cousin Billy, when Commodore Gaswell outlines a new mission for him. Matty is to make his way to the Jacmel in Saint-Domingue to gather information about a plot to raise a slave rebellion in the Southern United States. He is chosen for the mission because of his familiarity with the Creole dialect and as Gaswell says, 'Because I need an officer to go ashore that can pass for Creole.' Well aware that Creole 'can mean someone that ain't all white, and it can mean a European that was born in the colonies,' Matty realizes that Gaswell has raised a question of great concern to him, that of his mother's race. He embarks on the dangerous mission preoccupied by how he will be received by both whites and men of color. Matty is imprisoned and surrounded by death as he makes his way on and off the island.

"The second book in the Matty Graves series following No Quarter (McBooks Press, 2006/VOYA June 2006), this work fictionalizes historical figures such as Toussaint L'Ouverture and fills in gaps in the history books with realistic details of the brutality of war. This blending results in an exciting adventure novel. A glossary of naval terms will help readers who are not schooled in nautical fiction. Those who enjoyed the first book will like this one, and new readers will have no trouble becoming involved in Matty's adventures."

Here's a nice review of The War of Knives in the Journal for Adolescent and Adult Literacy. Also a friendly interview in the same place. (Scroll down a bit to "Interview with Broos Campbell.") Both pieces are by James Blasingame, who not only is a nice guy but obviously superintelligent for liking my books.

Did I mention that Publishers Weekly likes it? Click here to read the full review.